In keeping with last year — let’s make it a tradition — we’re celebrating our birthday with a special author interview featuring someone who is not only a great writer but has been a part of Every Day Fiction’s growth and development.

Kevin Shamel has helped EDF become what it is today, not just through his stories that we’ve published, but also by being an active and supportive member of our community.

His first novel is now about to be published, but we hope he won’t give up writing flash, because we’d miss him and his unique stories.

EDF: What should people expect when they see a story with your byline under it?

KS: Hopefully, something different. Even if they’ve just read something I wrote. I like to mix it up as far as what I write about and how I write it. I mostly write strange things, but I’ve been known to be mundane. I’m leaning more toward weird now. I also recently noticed that I write about secret animal societies — or at least one of them — quite frequently. It’s not something I set out to do most of the time — I just somehow end up there.

EDF: You’ve recently identified yourself as a writer in the bizarro genre — something a lot of people are still unfamiliar with. What can you tell us about bizarro fiction? What attracts you to bizarro? How does it feel to have found your niche there?

KS: Bizarro Fiction is the literary equivalent to the cult section of a video store.

It attracts me for many reasons, one of them being how completely satisfying it feels to have found my niche there. This genre offers the very best of strange, smart fiction that there is to offer. The novels and magazines coming out are like nothing else:

Books by Carlton Mellick III, Kevin L. Donihe, Gina Ranalli, Jeff Burk, Cameron Pierce, Mykle Hansen, Jeremy Robert Johnson, Jordan Krall… these are books to seek out if you want to find the most brilliant stars on the scene. They are amazing writers and story tellers. Actually, in July, I decided to only read Bizarro books for a year. It’s that varied, that good, and that inspirational.

The bounds of Bizarro are farther out than most fiction. That’s not to say that the writing is in any way experimental, or that the stories are difficult to follow. It just starts from a place where the main characters might be completely odd, or the world might not be quite like this one. The stories are well-written, the plots are tightly constructed and the characters are compelling. Authors of Bizarro write books for the sake of entertainment. For the fun of it.

As far as my writing goes, before I found Bizarro I was frequently told that my stories were too weird, too bizarre, too gross, controversial, or unconventional. Every Day Fiction has rejected a few for one of those reasons or another. I can’t argue with them — a great deal of my writing is not right for many venues. Reading and writing Bizarro is like a never-ending slip’n’slide ride across a giant, jalapeño-strawberry-chocolate lollipop for my mind. And it sometimes gives me shivers.

You can visit Bizarro Central at http://www.bizarrocentral.com to learn more about all things Bizarro.

EDF: You’re on the cutting edge of the new publishing scene, and your first book is about to be published; could you tell us a bit about it?

KS: My first book! Rotten Little Animals is due to be released by the end of October. It’s being published under Eraserhead Press’s imprint called the New Bizarro Author Series.

The story is about an animal film crew who kidnap a boy when he witnesses them filming a movie across the street from his house. The animals decide to make a movie about the kidnapping, which is highly illegal since the only real law in the animal world is that no human finds out that they can speak, drive vans, or make movies, etc. But that’s just the beginning of the story. Rotten Little Animals has explosions, drugged-out puppet shows, acrobat bats, wild sex scenes, car chases, an angry Yorkie, a martini-swilling bird, and a self-proclaimed Wizard of Wisdom who lives on an animal-free island. Oh, and zombie cats.

As far as being on the cutting edge of the new publishing scene goes, I can’t agree more with that statement. The publishing houses of Bizarro fiction and their authors are surfing the wave of progressiveness. Bizarro is independent media. It is mould-shattering. The people involved in this movement are expanding into a fresh, new frontier. Not only is the subject matter of what they’re publishing something completely different, but their idea of how the industry can and will work is completely different. It is exciting.

The Bizarro crowd is going about things in an unusual manner. The publishing companies are forming a community around them; a group of writers who support each other, as well as the genre. A family. Bizarro is an umbrella, a patron with its artists. It’s a new way of doing things and it’s just in time. There’s much more ahead. I’m happy to be on the edge with them.

Bizarro has developed a cult following that reads nothing else. This genre is for people who are tired of reading the same old thing. People looking for something fun and different. Something they can relate to, but that they’ve never thought of before. Something that isn’t force-fed through product placement and corporate study groups. A choice that allows them to think for themselves.

EDF: Every Day Fiction has been in publication for two years now, and during that time we’ve published fourteen of your stories. Do you have a favourite (or favourites) among them? What are some of the highlights and lowlights of your experiences with EDF?

KS: Every Day Fiction is the reason I started writing flash fiction. I am more than happy to have such a great number of stories published with EDF. I consider every one of them as a step in the right direction toward honing all of my writing into something readable. I like most of those stories quite a lot.

There are certainly some that stand out to me. “To Save the Disco” is one. I love that it’s all-dialogue and that half of it is from a narwhal. “A Bedtime Story For Breezy” is another I really liked having published at EDF. It’s a dreamy thing about a robot / woman / spaceship / time-capsule, but no one would ever know that. They’d think it was a pretty story about memories, or, as some put it — not a story at all. Ha! I like “Cyril Mack and the Very Cold Cup of Tea“. It’s Bizarro. (It’s got that secret animal society in it, too.)

Highlights of my time with EDF include: The staff. Jordan, Camille, and Steven are very excellent, professional people who happen to also be very nice and cool. I was thrilled when they published my first flash fiction story, “Haven“.

The readers! The opportunity to hear back from readers about my stories has been a valuable experience. With immediate input from readers on my stories, and support from the community at Every Day Fiction, it’s been a unique learning experience. And I’m happy to have found some like-minds out there in the world.

Having a story published each month at EDF for over a year. When they kept buying my stories, even the strange ones. Being included in their first Best of Anthology. It was great to meet the staff of Every Day Fiction in Vancouver for the launch party for that book. I’m also very happy to have met fellow EDF authors during that trip.

EDF: Where and when do you write? What music or other background noise do you prefer, or silence? And does the physical / background environment influence or affect your writing?

KS: There is always something in the background wherever I’m writing. It’s usually viewed from an interesting place to hide. It turns out that the animal secret society wasn’t too happy about being exposed and I spend most of my time running away from scary beasts with pointy teeth and poisoned parts.

The up side is that there is always something inspiring as I make my way with laptop, pencil, or mini tape recorder through mysterious terrain — searching for an animal-free place on Earth. Those damned things are everywhere.

I like a variety of music when I write. I like earphones so I can ignore the chirps, growls, howls, and general bestial scuffles outside whatever secret shelter I’ve found for the moment. For Rotten Little Animals I listened to a lot of Daft Punk. My favorite scene is a party where Daft Punk’s song, Steam Machine is playing. (Zombie attack.) I like a good mix — The Cure, Lemon Jelly, Ratatat, The Pixies, Modest Mouse, Talking Heads, Mr. Scruff, Joy Division, Danielle Ate the Sandwich, stuff like that. I definitely like to write to music. Or blessed silence. If I could ever find such a thing.

Everything influences and affects my writing.

EDF: What has been your best moment as a writer so far? Your worst?

KS: I’ve had several best moments. (I’m so bad at picking a favorite anything.) Right now I’m very excited about my upcoming book. I have an idea that my BEST best moment is lurking right around the corner.

There is no worst moment being a writer. There are frustrating moments, but they usually don’t have to do with writing. More the inability to write when I really want to, or waiting to hear back about a submission, or having a piece of writing that I love rejected over and over. All-in-all, even including attempts on my life from neighborhood pets, being a writer is great. It’s the best thing I could do.

EDF: What is next for you as a writer?

The release of Rotten Little Animals!

I’ll be attending BizarroCon in Portland, Oregon. It’s an all-Bizarro convention that runs from October 22 through the 25th. It’s a chance for Bizarro writers and hopefuls to meet, collaborate, and learn from each other about this blossoming genre. Panels, contests, performances, workshops, Bizarro lucha libre mask competition, Meat Magick, wisdom from Bizarro masters, beer, agape love… I can’t wait.

My science fiction/zombie/western short story, “West of Weston”, will appear in the new all-zombie Revenant Magazine in November. Withersin Magazine will publish a horror story of mine called, Sculpting, early in 2010.

You can always find out what’s going on with me at my website: http://www.shamelesscreations.com. There’s usually something in the works. Right now you can read an excerpt from Rotten Little Animals and see some peeks of the cover art by the amazing Angie Molinar, the illustrator for the Magazine of Bizarro Fiction.

Thank you for this interview, Every Day Fiction! I am so pleased you asked.

Every Day Fiction is a quality magazine — an innovator — an island in the rocking ocean of the wavy publishing world. It’s unique and excellent. I hope we’ll all be working together for a long time. I’ve really enjoyed being a part of its growth. Happy Birthday, Every Day Fiction!

Every Day Readers: Thanks for reading!

EDF: Thank you for your time. 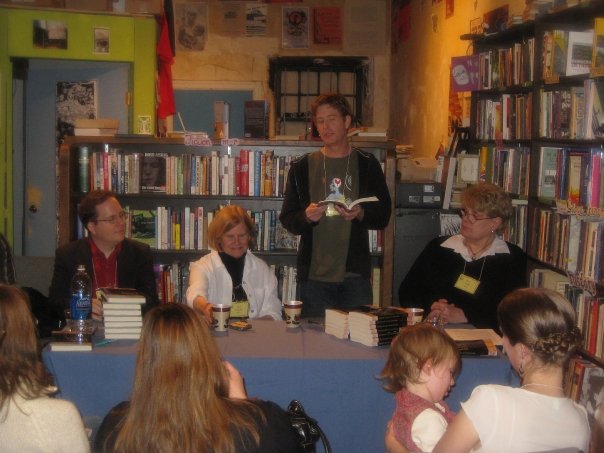 Kevin Shamel reads “To Save the Disco” at the launch party for The Best of Every Day Fiction 2008. He does a great narwhal voice. (also in the photo: Peter Tupper, Gay Degani and K.C. Ball)

Manage Cookie Consent
To provide the best experiences, we use technologies like cookies to store and/or access device information. Consenting to these technologies will allow us to process data such as browsing behaviour or unique IDs on this site. Not consenting or withdrawing consent may adversely affect certain features and functions.
Manage options Manage services Manage vendors Read more about these purposes
View preferences
{title} {title} {title}